In 2016, pickup trucks from Ford, Chevy, and Ram were the top three selling vehicles in America. Trucks don’t get the best gas mileage, and nearly 63 percent of the population lives in cities, where it’s simply more practical to own a commuter car. What’s more, a new truck isn’t necessarily an inexpensive prospect. So what explains the popularity of trucks?

Whether it’s the capacity for hauling big loads, the freedom to abandon the highway and careen off-road through the countryside, or the capability to handle all levels of terrain–from mud, to snow, to sand, to rocky tundra–the pickup truck can do it all. Trucks are built for the American experience. Freedom, hard work, fun, adventure; here’s a view of what trucks mean to the country where they were born.

The history of trucks

Ford has had the best selling vehicle for the last 35 years, and in the history of trucks, Ford is also the first manufacturer, with the 1925 Model T Pickup. Henry Ford created the pickup expressly for farmers. Ten years later, component supplier Marmon-Herrington began converting Ford pickup trucks to four-wheel drive. The first official manufactured four-wheel drive truck was the 1946 Dodge Power Wagon, which continued selling until 1968. All other truck manufacturers followed suit to offer four-wheel drive trucks in the late 1950s.

Because these early trucks were such a success, manufacturers began making trucks in different styles. Among the many styles, flat-nosed pickups, crew-cab trucks, extended cab trucks, compact mini-trucks, and muscle trucks all followed throughout the latter half of the 20th Century. The 70s saw the advent of heavy-duty diesel-powered trucks, as typified by the GM 5.7-liter V8. Higher gas prices in the 80s helped small car-based trucks get big. In 2002, Chevy released the first SUV-truck mashup, the Avalanche. The 2000s also saw the rise of the luxury truck, such as the Ford Blackwood.

America, on and off-road 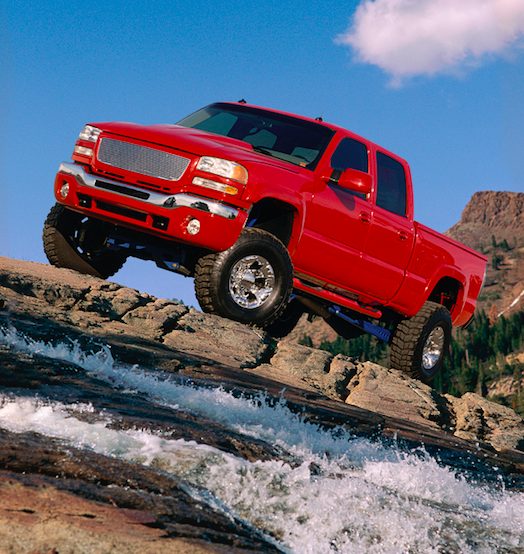 So why has a truck (the Ford, specifically) been the best selling vehicle for the last 35 years? The US is a vast country with every type of terrain imaginable, from rainforests to mountains to desert and prairie. While the Census Bureau notes that 63 percent of people live in cities, it also points out that cities make up just 3.5 percent of the land area. There’s a lot of room to play. But there’s also a lot of work to do, whether you’re in town or country. With versatility, trucks cover both these bases.
Nothing encapsulates this more than the Chevrolet Colorado. Named the number one off-road vehicle by Popular Mechanics, the ZR2 edition is specifically designed for the off-road experience. Upgraded suspension gives you more clearance, traction control helps you scale steep inclines, a wide wheelbase discourages rollovers, and locking differentials deliver 100 percent of available torque to the wheels, which helps you negotiate snow, ice, and mud.

At the same time, the mid-size Colorado gets 22 miles-per-gallon in the city and 30 mpg on the highway, best in class for its size. This is encouraging for city-dwellers who need a truck to haul loads, do landscaping, construction and other jobs, or impress their friends. If they want to get out of the city and try some different terrain, the truck gives them the option to do so. 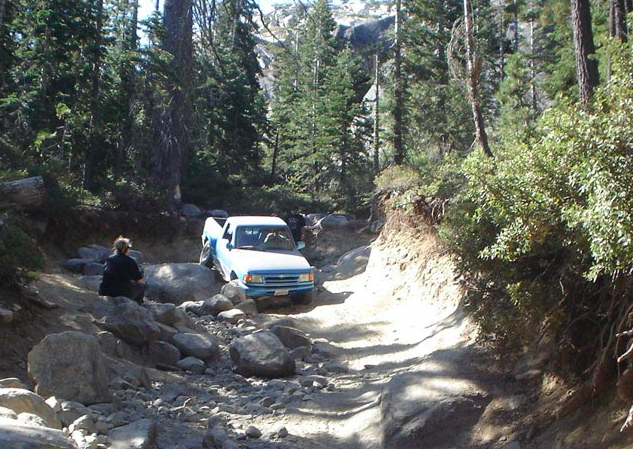 For the off-road beginner, the options are plentiful. Interested in a full-blown trip? Look no further than America’s West. On the list of the 10 best off-road trips, there are treks such as the Washington Backcountry Discovery Route, which has both campsites and hotels on it, and is well-suited for weekend warriors. Spanning from the Cascade Mountains rainforest to Eastern Washington’s high desert, it covers a lot of gorgeous country.

Elsewhere, the Utah’s White Rim Trail is so scenic and accessible, you’d be wise to reserve a campsite ahead of time. On the 100-mile trail you’ll glimpse sandstone arches, towers, buttes, rivers, and old Native American ruins. Mountain-bikers take this trail too; it’s perfect for the off-road beginner who wants to try out that traction control with a truck-bed full of camping gear and water, lots of water.

Preparedness is essential for any off-road trip, particularly California’s Rubicon Trail, where 33-inch tires, a three-inch lift, a roll cage, fire extinguisher, and a first-aid kit are highly recommended. 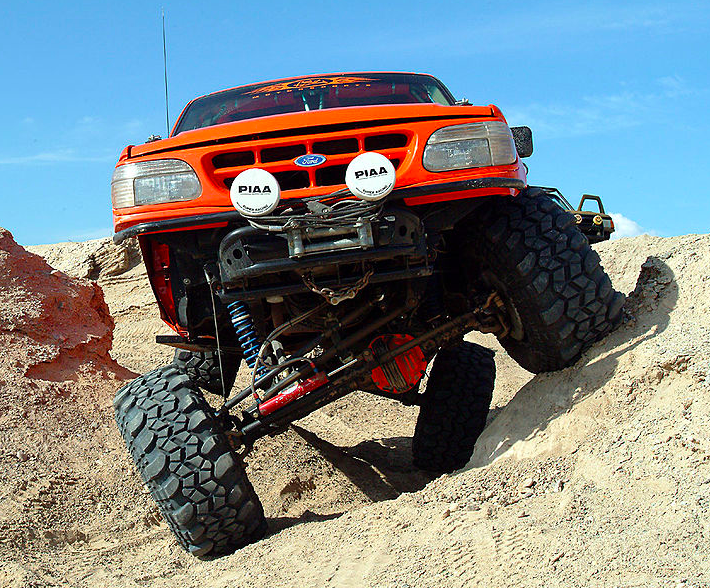 More than anything, the wildness of this huge country requires the off-roading adventurer to be prepared. From the time of the first pilgrims, through Lewis and Clark and westward expansion, clear up until now, being prepared for anything the elements can throw at you has been a big part of being American.

A well-modified and rugged pickup truck is the embodiment of this preparedness. Four-wheel drive means you don’t have to rely on roads. If you don’t want to get stuck in the mud, you can throw a set of mud terrain tires on your truck. If you’re concerned about snow and nasty weather, snow tires offer the most traction. Lift kits, roll bars, breather and intake modifications–these are just a few of the changes you can make on a truck to prepare it to go anywhere.

Although many people who live in cities don’t absolutely need a truck for their everyday activities, the truck has become a symbol of toughness and self-reliance–a symbol of what it is to be American.

The rest of the world is fascinated by this. The UK’s Ryan McElroy, in an article asking why America is so in love with the pickup truck, says, “The pickup truck has refashioned the country in its own image. For all intents and purposes, the humble pickup is America: the living embodiment of the working spirit; the American dream with four wheels and a V8 engine.”

He also points to more practical reasons for the truck’s success. The US is more than 3.8 million acres in size, so our economy depends on the efficient transportation of goods and people. After the introduction of the Model T Pickup, we were able to engineer and build infrastructure to maximize the efficiency of truck transport. Because of its importance to the economy over the years, the government hasn’t placed tight restrictions on pickup truck fuel economy.

But that’s changing. The Environmental Protection Agency and the National Highway Traffic Safety Administration passed new emissions standards for medium and heavy-duty trucks in 2016. The US is cleaning up its act on trucks, and you can be sure manufacturers will be able to meet new standards, because innovation is also part of the American way.

If you want the ability to go off-road in your truck while still achieving good fuel economy and efficiency on the road, there are a number of innovative off-road tires for the street. Among these, the Cooper Discoverer AT3 has features that could improve your truck’s fuel economy by up to 2 percent. Every little bit counts.

As we move into a new era of fuel efficiency, when it comes to both work and play, trucks will continue to be an American standard. It’ll be exciting to see where trucks go as vehicle technology continues to evolve. Let the good times roll!

Trucks : An American Pastime was last modified: February 18th, 2019 by Tires-Easy
It's only fair to share...

Members SAVE 40% AND MORE

Become a Tires-easy member and enjoy 40% and more on thousands of tires!
Create an Account

Limited quantity and time to find the right size for you from our specially priced tire offer.
Find a DEAL

It was very easy to find my specific tire and order. Thanks! Brian K., New York/NY more

© Tireseasy, LLC and tires-easy.com, 2022. Unauthorized use and/or duplication of this material without express and written permission from this site’s author and/or owner is strictly prohibited. Excerpts and links may be used, provided that full and clear credit is given to Tireseasy, LLC and tires-easy.com with appropriate and specific direction to the original content.

This work is licensed under a Creative Commons Attribution-NonCommercial-NoDerivatives 4.0 International License.